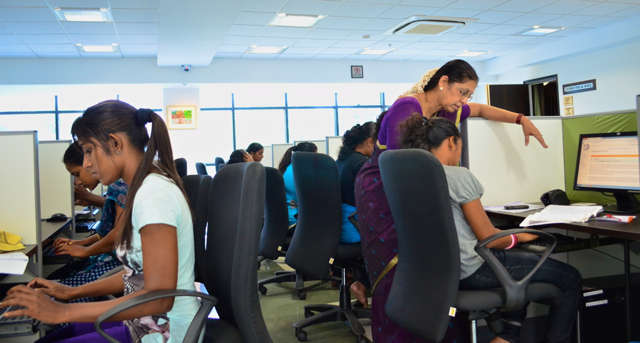 Konkani as a language has seen geographical, political and religious conflicts. Being the official language of Goa and spoken widely in the Indian states of Karnataka, Kerala and Maharashtra it is still trying to strengthen its base. Recently CIS-A2K in collaboration with Goa University organized a four-day workshop for MA, Konkani language students. This workshop involved 38 students creating 43 new articles on Konkani Wikipedia which is in incubation. We’re hoping that these efforts will contribute towards bringing this 7 year old project out of incubation to a live Wikipedia project.

Before any language, Wikipedia shapes up as a live project where an incubation process is involved. A community of volunteers (known as Wikipedians) gradually grow to sustain this Wikipedia  in incubation with active contribution.The Konkani Wikipedia incubator started way back in 2006. But because of many reasons it could not take off and is still in incubation. One of the major reasons has been the issue with multiple script usage. Because of the political and religious reasons Konkani has multiple writing and verbal standards and also written in multiple scripts; Devanagari and Roman (known as Romi as well) in Goa where Devanagari is the official script, Kannada in the Konkani speaking regions of Karnataka (Mangalore region primarily), Malayalam in Kerala (Kochin region) and in Perso-Arabic script by part of the Konkani speaking population. The largest script usage for Konkani is in Devanagari. Goa University is world’s first University to have a masters program in Konkani language where the writing standard is in Goan Konkani (Language code: Gom) which is written in Devanagari. During the interaction with the faculty members; Prof. Madhavi Sardesai and Head of the department Dr. Priyadarshini Tadkodar, it was found that the students were very enthusiastic to contribute to their language. The students were introduced to Konkani Wikipedia and they showed interest in taking part in a workshop to learn Wikipedia editing. This was the beginning of something new after a long time. Four out of thirty eight students volunteered to coordinate the workshop on the ground. They discussed about the workshop and the prerequisites; going through the list of articles on Konkani Wikipedia, writing a unique article by collecting resources and creating their usernames on Wikipedia before attending the workshop. All of the students including four coordinators came with at least 2 pages of written content before the workshop.

It was 10 in the morning, a big LED panel in the audio visual room of the Krishnadas Shama State Central Library, Goa was displaying the word cloud containing words like Wikipedia, Openness, Education, Open Knowledge, Global Collaboration. Soon the room was filled with 20 MA students from the Konkani department of Goa University. Prior to the workshop there was an interaction with the students in the presence of the Head of the department Dr. Priyadarshini and Prof. Dr. Madhavi Sardesai and from the Konkani department. Four of the students Supriya Kankumbikar, Fr. Luis Gomes, Vaishali Parab and John Noronha volunteered to coordinate the workshop. With their help, a majority of students signed up and created their user accounts before the first workshop. Some roughwork went on to plan for a whole day workshop.

To start with the first day, there was an “Adjective Name” activity. It was fun to know how people judge themselves with adjective. Then there was a discussion about articles students planned to write. Few of them were not sure if the articles like social issues and biography of a writer could fit into the Wikipedia framework.

Article titles were decided and everyone was ready with their homework write ups and books for adding sources. The next big thing was typing in Devanagari. Only four to five of them knew typing. Students came forward to try out typing. There was a glow of triumph after they typed correctly using “Transliteration” layout. The editing session began. It worked well. Students managed to type with only a little typos. 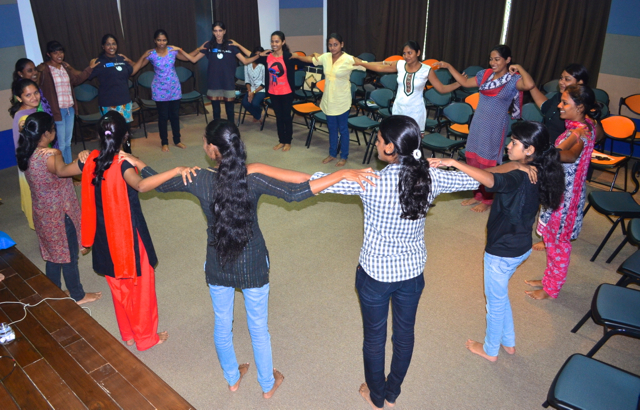 There was an activity break with a game called “Tumi Kashi Asat” (means How are you doing in Konkani). According to the game rules, the host has to make some body movements and ask “Tumi Kashi Asat” and bending forward. The participants have to move their body in the reverse way and answer “Ami bari ashat” (I’m doing good). This replaced the caffeine intake for the four days and kept all of us alive.

The editing spree went on for the rest of the day. Regular doses of small fun activities were served to keep the Goan tides high. Surprisingly, all of the students created articles. It was the greatest start for a language to have the asset of these sweet wikipedians that have seen many struggles and spent 7 years in incubation.

“Rat race” is a game where participants sit on chairs and one of them is made to stand in the center. The rat makes others run and replace each others seats and one among the participants becomes a rat. This rat race brought back the old childhood memories and for a moment everyone forgot their age. At the end of it students sat down to take a deep breath and were taught some of the basic wiki-codes (bold, Italics and adding references). Editing session went on until the rest of the day.

Day 2: Climbing Up the Ladder

The agenda for the day was to tell the students about the advanced options and ensure addition of more citations. Citations on Wikipedia are very essential for readers to validate the facts. But bringing this to the students who just had started typing in their language a day before was not that easy. The second day was spent giving small breaks during the editing session for small activities. Running, jumping and shouting fueled the students to be happy editors and not burdened. By the end of the first two days 22 students created 24 articles (About 42 pages of written content). Everyone clapped for their friends, they were welcomed into the Konkani Wikipedia community and were shown the facebook group they could join and be more connected before thanking and saying bye for the day with the promise of more fun for the next workshop. 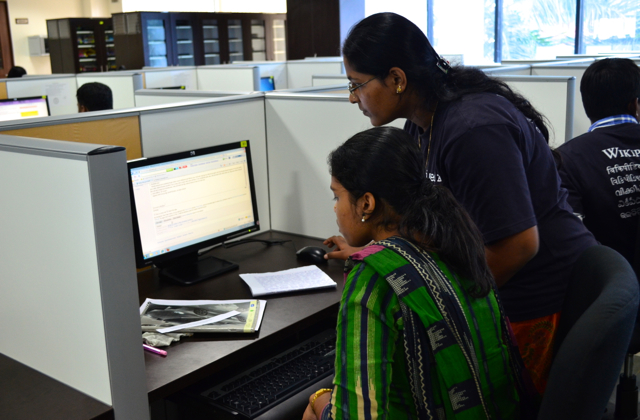 16 new students from the MA course were welcomed. Four student-coordinators and one from the first batch of students joined the funday. The entire day was spent with lots of fun, creating articles and basic know how about Wiki-codes. Half the students in this batch knew typing in Devanagari Inscript. The students were then paired with those who knew Inscript and thanks to the Fedora Devanagari keyboard layout. All of the students created their first articles.

Seeing the newspaper coverage about the workshop featuring some of their friends was a delight for the new wikipedians after two long days. Few of them came forward to share their experience about the workshop and their vision for the Konkani language.

At the end of four days all of them bid farewell. These were the foundation days and the biggest editing rally Konkani Wikipedia Incubator has seen in the last seven years with this milestone that the students had created.